Traces of Unconscious in Language

The significance of language in clinical practice first emerged with the Anna O. case, a study by Freud. Lacan went on to support Freud’s findings. Through the Back to Freud movement, Lacan proved language to be crucial from theoretical and clinical perspectives. According to Lacan, the name of the father in the language used by the mother functions as a signifier for the mother’s desire. It corresponds to the first repression and enters the symbolic register. It refers to Lacan’s famous statement ‘Unconscious is structured like a language’. As such, in his theory, Lacan actively uses the concepts of signifier, signified, metaphor and metonymy and offers new interpretations of these concepts. Therefore, to study the unconscious, working with language is the main method. However, because of repression, the unconscious can only be studied through the traces it shows in language. In this article, traces of the unconscious in language are explained using clinical examples. Clarifications are provided as to how traces of the unconscious can be studied analytically. 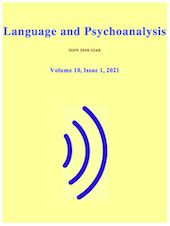 This work is licensed under a Creative Commons Attribution 4.0 International License.

This is an Open Access journal. All material is licensed under a Creative Commons Attribution 4.0 International (CC BY 4.0) licence, unless otherwise stated.
Please read our Open Access, Copyright and Permissions policies for more information.